Scale of the problem

Tooth decay is largely preventable yet it remains a serious problem. Findings from Public Health England’s (PHE) 2015 national dental epidemiology survey of 5 year old children showed that in 2015 in England, a quarter (25%) of 5 year olds had experienced tooth decay, having on average 3 or 4 teeth affected. The vast majority of tooth decay was untreated.

There was wide variation in the prevalence of tooth decay. The areas with poorer dental health tend to be in the north and in the more deprived local authority areas.

When comparing the regions, the estimates of tooth decay ranged from 33% in the north west to 20% in the south east.

The highest level of tooth decay was found in Blackburn and Darwen, where 56% of children aged 5 have tooth decay compared to the lowest level of just 4% in South Gloucester.

The most recent data for 5 year olds shows that 41% of variation can be explained by deprivation.

The 2013 oral health survey of 3 year olds found that 12% had experienced dental decay. On average, these children had 3 teeth affected.

Poor dental health impacts not just on the individual’s health but also their wellbeing and that of their family. Children who have toothache or who need treatment may have pain, infections and difficulties with eating, sleeping and socialising.

A quarter of 5 year-olds have tooth decay when they start school. Children who have toothache or who need treatment may have to be absent from school and parents may also have to take time off work to take their children to a dentist or to hospital.

Oral health is therefore an important aspect of a child’s overall health status and of their school readiness.

Many children would be missing additional school days while attending the hospital and recovery the following day, culminating in the majority of children missing at least 2 school days with some children being absent for up to 15 days.

These missed school days will not only affect the child, but the family as well. Many days of work were potentially lost, as 41% of parents or carers of these children were employed.

Oral health is seen as a marker of wider health and social care issues including poor nutrition and obesity. The relationship between obesity, deprivation and dental caries is unclear. Despite this, it is likely that interventions that reduce sugar intake have the potential to impact both conditions at the population level because deprivation and high intakes of free-sugars are known risk factors for both dental caries and for obesity.

Evidence shows that poor oral health may also be indicative of dental neglect and wider safeguarding issues. Dental neglect is defined as ‘the persistent failure to meet a child’s basic oral health needs, likely to result in the serious impairment of a child’s oral or general health or development’.

Children who have high levels of disease in primary teeth have an increased risk of disease in their permanent teeth. If treated, these teeth will require long term maintenance throughout life.

Dental treatment under general anaesthesia presents a small but real risk of life-threatening complications for children and carries significant morbidity for children undergoing this procedure.

Tooth decay results from the destruction of the hard tissues of the tooth by acids produced in the mouth when bacteria in dental plaque metabolises dietary sugars. Repeated and prolonged acid attacks will eventually cause the tooth surface to weaken and a hole or cavity will form which may lead to pain and infection.

The risk of tooth decay increases as a child’s diet starts to include foods and drinks other than breast milk or formula, depending on the free sugar content.

Every child who has teeth is at risk of tooth decay, but the risk increases for those living in the more deprived areas where the imbalance in income, education, employment and neighbourhood circumstances affect the life chances of children’s development.

Children are more at risk of developing tooth decay if they are:

How to prevent tooth decay

Improving child dental health requires a whole systems approach with action across the sector, from national and local policy, healthcare to families and the food and drink industry. Whilst local authorities have a lead statutory role in improving the oral health of their local population, everyone has a part to play.

Health professionals, such as midwives and health visitors, should support and encourage women to breastfeed. Creating the right environment to promote this is crucial. The UNICEF Baby Friendly Initiative provides a robust evidence based framework to develop a whole-systems approach to breastfeeding.

The UK government recommends exclusive breastfeeding for around the first 6 months of life. Complementary foods should be introduced into the infant’s diet from around 6 months of age alongside continued breastfeeding (or infant formula if the mother chooses).

Give healthier eating advice routinely to patients to promote good oral and general health. The main message is to reduce the amount of foods and drinks that contain ‘free’ sugars – a definition set by the Scientific Advisory Committee on Nutrition (SACN).

SACN’s definition of ‘free’ sugars includes all sugars added to foods and drinks by the manufacturer, cook or consumer, as well as sugars naturally present in honey, all kinds of syrups and unsweetened fruit juices. It does not include sugars naturally present in milk and milk products and sugars contained within the cellular structure of foods (particularly fruit and vegetables).

Healthy Start vouchers can be used to help families on a low-income buy basic foods such as milk and fresh or frozen fruit.

PHE’s Delivering Better Oral Health: a toolkit for prevention recommends that for all children:

Cut down on sugar consumption

SACN recommends that the average intake of ‘free’ sugars for all age groups from 2 years upwards should not exceed 5% of total dietary energy intake. However, children are consuming 2 to 3 times that amount and this is having a damaging effect on their health. 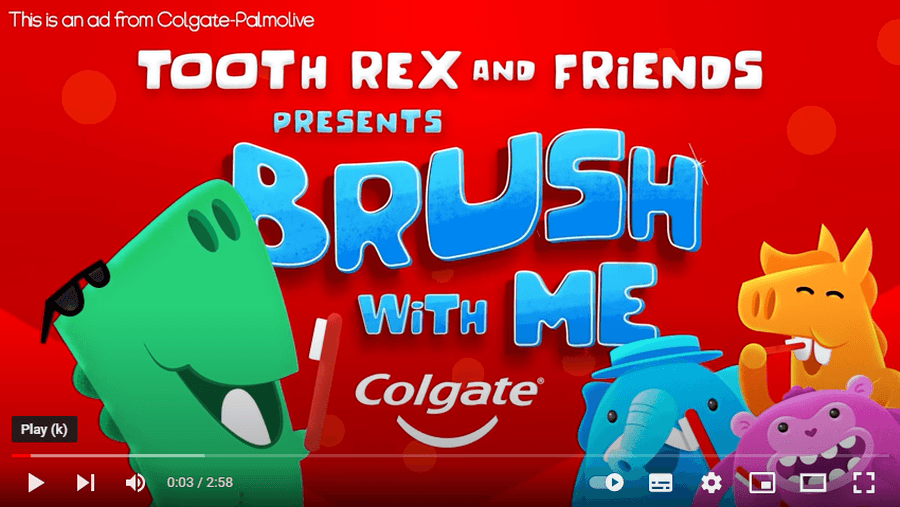 Try using this link while brushing your teeth to make toothbrushing more fun!